Not to be left out, I didn’t want to pass up the opportunity to give my thoughts on Zwift’s new route, Titan’s Grove. Complete with a handful of pretty screenshots, of course.

There are several ways to get to Titan’s Grove relatively quickly but I chose the 12.5 loop called Sand And Sequoias which starts out with about 6 miles of the new desert route, Tempus Fugit. The loop makes for a nice quick workout with the first half being flat and fast providing a nice warm-up for the second half through Titan’s Grove and its 3 short climbs. The entire circuit has a total of of 569 feet of climbing with almost all of it being within Titan’s Grove, averaging only about 2 percent gradient throughout.

After about 6 flat miles of sandstone, wildflowers, and the iconic dinosaur statue…

you quickly transition to a lush green Forest of redwoods.

As you begin climbing to the route’s summit, you enter a foggy and misty stretch of forest. You can almost feel the chill in air.

Unlike Tempus Fugit, the dinosaurs in Titan’s Grove are real (in a virtual kind of way, of course). Fortunately, they seem to be content to just go about the business. No Jurassic Park drama at this point.

And then you descend back to the valley.

As you can see from this aerial view, Titan’s Grove is composed of lots of rolling switchbacks which, in my opinion, makes the new route one of the most immersive and engaging Zwift has developed.

With it’s rolling profile, short but challenging summit, and switchbacks galore, I think Titan’s Grove is one of the most immersive and entertaining routes in all of Watopia. What do you think of Zwift’s new route? Leave your comments below and thanks for reading! 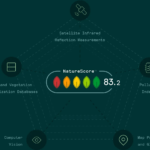